The Heinkel Kabine was a microcar designed by Heinkel Flugzeugwerke and built by them from 1956 to 1958. Production was transferred under licence to Dundalk Engineering Company in Ireland in 1958 however the licence was withdrawn shortly afterwards due to poor quality control. Production restarted in 1960, again under licence, under the Trojan 200 name by Trojan Cars Ltd. in the UK, and continued until 1966.

The Heinkel Kabine were also assembled from 1959 to 1962 under licence by Los Cedros S.A. As Heinkel in Argentina, they were built alongside Studebaker pickups.

Production began in March 1956 with the Kabine Model 150, using the 174 cc 9.2 hp single-cylinder four-stroke engine that powered the Heinkel Tourist scooter. In October 1956, Heinkel introduced the Kabine Model 153 (with three wheels) and the Kabine Model 154 (with four wheels), both with 204 cc engines. The engines in these models were later reduced in capacity to 198 cc for insurance purposes.

The Kabine had a steel unit body. Access to the interior was by an opening front. In order not to infringe Iso Rivolta’s patent used on the Isetta, the steering wheel did not hinge outwards with the door to ease passenger access. However, it did feature a reverse gear, unlike some other bubble cars. The fabric sun roof served as an emergency escape hatch should the sole door in front become jammed in a collision. 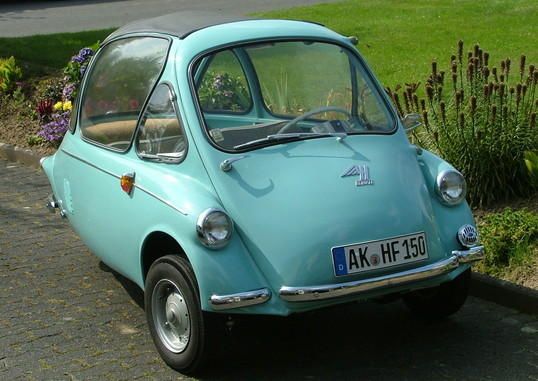 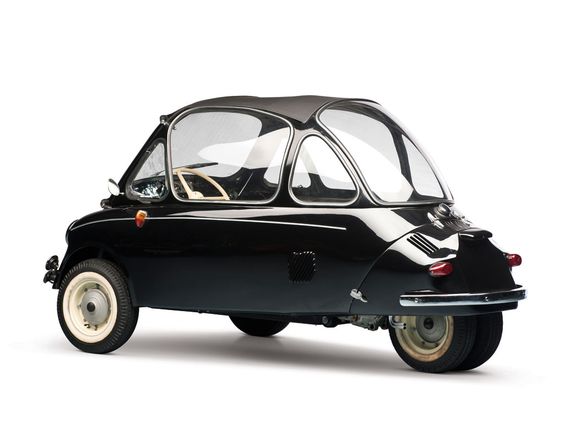 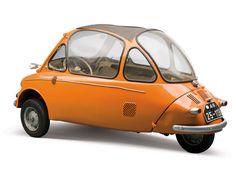 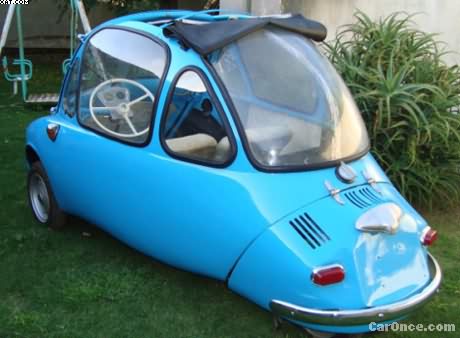 An estimated 27,000 three and four wheel cars along with a few vans and convertibles were manufactured between 1955 and 1964 in Germany, Argentina, Ireland and England. The best guess on production is:

Information on German, and English production is fairly well documented, although sources often differ, but there is very little on Irish and virtually nothing on Argentinean production known to the Club.

Identifying the various models is not always straight forward, so this does not purport to be a definitive listing. More details on the specification of the cars appear in ‘Exploring the Brochures of Heinkel Trojan Cars’ available from the Club.

There were at least two, and probably five, versions of the 174cc, Type 407, engine fitted to the Type 150 cars. Siba and Bosch dynastarts were fitted on all types of engines and were fitted to both scooters and cars. Early cars had a rod operated gear change, this was changed to cable operation from around engine no 482000.

Chassis numbers and engine numbers, together with the year of manufacture, are on the chassis plate, which should be on the right hand (when sitting in the car) wheel arch. The engine number, on all engines, is stamped on the top of the crank case, between the dip stick hole and the retaining stud for the exhaust bracket. The chassis number may also be stamped at the base of the right hand wheel arch. There does not appear to be any correlation between engine and chassis numbers. From the parts book:

To complicate matters further, Type 150 B-1 cars were assembled in Eire from parts manufactured in Germany. It is not known how many, or even how to differentiate between German and Irish assembled, as opposed to Irish produced cars, from either the chassis or engine numbers.

There were probably three versions of the Type 408 engine fitted to cars. The new engine was a bored out version of the Type 407, retaining its 61.5 mm stroke, this increased power to a claimed 10 hp at 5,500 rpm. The first Type 408 engine, the B-0 retained the three bearing crankshaft arrangement of the original 174cc engine, the other versions had a two bearing crank. Other modifications including the introduction of a four plate clutch with diaphragm spring in place of the three plate and coil spring version. The 408 B-0 was fitted with a 65mm piston giving a capacity of 204cc. It is thought that this was only ever fitted to early four wheel cars. It was considered that the capacity of the engine had been increased too much, so the standard bore size was reduced to 64mm for the Type 408 B-1 and B-2 engines. However, it must be remembered that a large number of Type 150 cars were fitted with 198cc engines with numbers in the series 515###. The main difference between the Type 150 and 153 cars is not known but it is not the introduction of the larger engine as the parts book suggests.

Heinkel produced a number of prototypes, including a right hand drive version. This differed from the later Trojan cars by having the door hung on the left.

Very little is known about production in Argentina. Documents held by Trojan Limited refer to the sale of 2,500 kits of parts to Los Credos, in Argentina. They also refer to an enquiry for an additional 600 kits. There is no evidence that these additional kits were supplied. Even if the kits were exported it does not necessarily mean that they were all built and sold. There are three Argentinean cars on the Register with chassis number ranging from 857 to 3244 with claimed dates of manufacture between 1959 and 1961. If Heinkel supplied a production line and some kits direct in 1957/58, before those supplied from Ireland then a production of over three thousand, is consistent with the above information. It has also been suggested that production was as low as a hundred before the Heinkel company stopped production because of poor build quality.

Initially cars were assembled in Eire from parts manufactured in Germany. The cars had chassis and engine numbers in the same series as the German cars and it is not know how many were built before the production line was moved to Dundalk in the middle of 1958.

Full production in Eire is thought to have taken place between October 1958 and Early 1961. Their system of chassis numbering appears to have used six or seven digits. The first three being 153 for a three wheeler and 154 for a four wheeler. The 153 and 154 models do not seem to have had separate series of numbers. According to a Trojan internal memo the last chassis produced in Ireland was 6486. The chassis plate is located on the top of the right hand side wheel arch.

There is evidence that Heinkel Ireland produced at least two prototype vans. The one in the photo was probably sold to Trojan when they bought the production line and used it in their advertising (It has an Irish number plate). A second with top opening rear door was exhibited at the Dutch Motor Show in February 1959.

They also produced at least two and possibly three Sports (convertible) prototypes. One was produced by International Sales in London and shipped to Dundalk for evaluation where at least one more was made and used in Eire.

Engines were still supplied by Ernst Heinkel Ag and it is thought all were 198cc of 408 B-1 (four wheeler) or 408 B-2 (three wheeler) specification. Engine numbers fitted to early cars follow the German sequence indicating that stocks of pre-numbered engines were bought along with the production line. Later engine numbers are seven digits starting with a 1, the last six numbers appear to conform with the series given for German Production above.

In 1961 Trojan bought the world wide marketing rights for the car, but not the scooter, as this would have been in conflict with their tie up with Lambretta. They also bought the production line, 100 complete cars and 2,674 kits of parts. Their plan was to refurbish and sell the 100 cars, which had been stored in the open, while the production line was established. It is thought that production started towards the end 1961. Production ceased in 1964 at the works summer shut down. By this time the cars had become very difficult to sell, and some were not registered until 1966. This is hardly surprising as according to Motor Cycle magazine in March 1963 a new mini van, which was exempt from purchase tax, would have cost you £368 against a list price of £369 15s for a right hand drive Trojan! Trojan chassis plates, on the left hand wing on right hand drive cars, show the chassis number and engine number but not year of manufacture. The chassis number was also ‘stamped on the right hand front wheel arch angle adjacent to the door opening’, on later cars it can be found on the front of the parcel shelf. An alpha numeric code was used for the chassis number. The first letter is thought to indicate the country of destination. All UK cars start ‘S’, most in Sweden start ‘X’, most in Holland start ‘H’, one in Austria starts ‘A’ and one in the USA starts ‘Y’. The remaining letters indicate paint colour;

According to Glass’s Guide the Trojan chassis numbers start at 7001, this is confirmed by the Trojan’s records. The first right hand drive car is 8182. The highest number, according to a Trojan Dealers Information Sheet, is 13179. Using the above numbers and assuming there were no gaps, gives a total production run of 6,179.

Model Identification used by Trojan was

Engine numbers follow the Irish pattern of a seven digit number starting 152#### for the 2,674 engines bought from Ireland. Thereafter engines were numbered 3-####, for three wheel cars and 4-#### for four wheelers. These engines were purchased directly from Heinkel by Trojan and include changes to specification, including the reintroduction of the Siba dynastart and changes to the gear box components. As Heinkel engineers did not approve of some of the changes insisted on by Trojan they would not guarantee their engines so Trojan took on the responsibility for all warranty claims.

According to Trojan archive material a total of 19 vans were produced, all three wheelers and right hand drive, the project was shelved when Customs and Excise refused to exempt them from purchase tax. One was sold to Singapore, which has recently surfaced in Malaysia, the others in the UK between November 1962 and some time in 1963. Both three and four wheel convertibles were also available. At least one three wheel prototype was produced and used in Trojan’s promotional material. It is not known if any others were produced. The small additional price probably meant that Trojan would take the roof off for anyone who wanted an open car.

According to Trojan’s records only five model 602, right hand drive four wheel, cars were produced. Two were sold in New Zealand, one each in UK, South Africa and Singapore. It was thought that all had been lost until 1995 when one surfaced in New Zealand. Trojan Limited’s racing heritage, they went on to build sports and racing cars for McLarren and are still in business restoring them

from the Heinkel Trojan Club