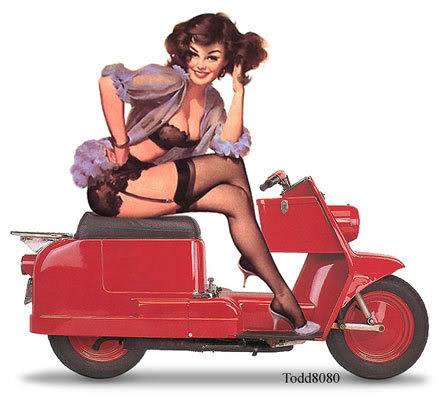 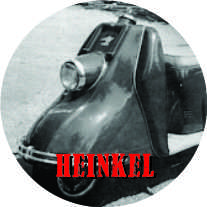 A scooter or motor scooter is a motorcycle with step-through frame and a platform for the rider’s feet. Elements of scooter design have been present in some of the earliest motorcycles, and motorcycles identifiable as scooters have been made from 1914 or earlier.

In post-World War II Italy the Piaggio Vespa became the standard for scooters, and has remained so for over 60 years. Patented in April 1946, it used aircraft design and materials. D’Ascanio’s 98 cc (6.0 cu in) scooter had various new design concepts, including a stress-bearing structure. The gear shift lever was moved to the handlebars for easier riding. The engine was placed near the rear wheel, eliminating the belt drive. The typical fork support was replaced by an arm similar to an aircraft carriage for easier tire-changing. The body design protected the driver from wind and road dirt. The smaller wheels and shorter wheelbase provide improved maneuverability through narrow streets and congested traffic. Combining the best elements of automotive, aeronautical and motorcycle design, the Vespa quickly became an icon of design and economy. The name originated when Piaggio’s president, upon seeing the prototype, remarked “Sembra una vespa”, “It looks like a wasp”
.

Months after the Vespa, in 1947, Innocenti introduced the Lambretta, beginning a rivalry with Vespa. The scooter was designed by Innocenti, his General Director Giuseppe Lauro and engineer Pierluigi Torre. The Lambretta was named after Lambrate, the Milanese neighborhood where the factory stood. It debuted in 1947 at the Paris Motor Show. The Lambretta ‘A’ went on sale on December 23, 1947, and sold 9,000 units in one year. It was efficient, at a time when petrol was severely rationed. It had a top speed of 45 mph (72 km/h) from a fan-cooled engine of 123 cc (7.5 cu in). The first Lambretta designs had shaft drive and no rear suspension, later designs used various drive and suspension systems until Lambretta settled on a swingarm-mounted engine with chain drive.

Germany’s aviation industry was also dismantled after World War II. Heinkel stayed in business by making bicycles and mopeds, while Messerschmitt made sewing machines and automobile parts. Messerschmitt took over the German licence to manufacture Vespa scooters from Hoffman in 1954 and built Vespas under from 1954 to 1964.

Heinkel designed and built its own scooters. The Heinkel Tourist was a large and relatively heavy touring scooter produced in the 1960s. It provided good weather protection with a full fairing, and the front wheel turned under a fixed nose extension. It had effective streamlining, perhaps thanks to its aircraft ancestry. Although it had only a 175 cc (10.7 cu in) 4-stroke motor, it could sustain speeds of 70 mph (110 km/h). Heinkel scooters were known for their reliability.

Glas, a manufacturer of agricultural machinery, made the Goggo scooter from 1951 to 1955. Glas discontinued scooter production to concentrate on its Goggomobil microcar. Several manufacturers in the German motorcycle industry made scooters. NSU made Lambrettas under licence from 1950 to 1955, during which they developed their Prima scooter. Production of the Prima began when NSU’s licence to build Lambrettas ran out.

Maico built the large Maicoletta scooter in the 1950s. It had a single cylinder piston-port two stroke engine, with four foot-operated gears and centrifugal fan cooling. The Maicoletta had a choice of engine sizes, approximately 175 cc (10.7 cu in), 250 cc (15 cu in), or 275 cc (16.8 cu in), The tubular frame was built on motorcycle principles, with long-travel telescopic forks and 14-inch (356 mm) wheels. The Maicoletta had a top speed of 70 mph (110 km/h) which was comparable with most 250 cc (15 cu in) motorcycles of the time. 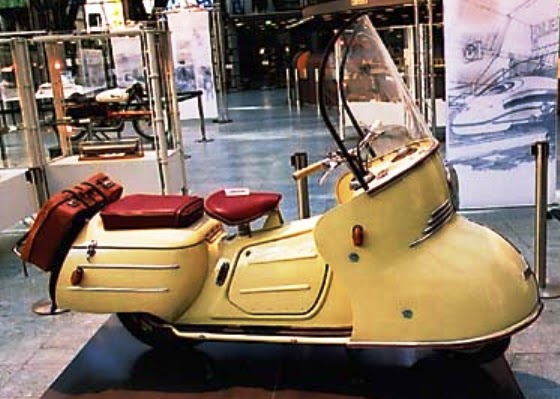 Other German scooters made by motorcycle manufacturers included the DKW Hobby, the Dürkopp Diana, and the TWN Contessa.

The Čezeta was originally a motor scooter manufactured from 1957 to 1964 in what was then Czechoslovakia,

The original design of the Čezeta is unique amongst scooters. It is unusually long for a two-wheeled vehicle at 2 metres and has a distinctive torpedo-shaped body with a long seat that lifted to reveal a substantial luggage compartment, using space that in most scooters is occupied by the fuel tank. The front mudguard is fixed to the body and fully streamlined into the leg shields. The fuel tank is positioned above the front wheel, with the headlight fitted into a recess and a luggage rack on the flat top surface. It was a common joke amongst Čezeta riders that the exposed front tank with built-in headlight formed an explosive warhead and detonator for the torpedo, though in practice the Čezetas proved no more likely to catch fire than any other motor scooter, even in serious collisions.

The scooter was driven by the 175cc ČZ two-stroke single-cylinder motorcycle engine, giving a top speed of 55 mph and economy of 3.2 litres/100km. The engine was modified for the enclosed scooter by having a drive pulley on the crankshaft driving a fan by means of a Vee belt. There were four foot-operated gears.

E. Foster Salsbury and Austin Elmore developed the Salsbury Motor Glide, a scooter with a seat above an enclosed drivetrain, and began production in 1936 in California. In 1938, Salsbury introduced a more powerful scooter with a continuously variable transmission (CVT). This was the first use of a CVT on a scooter. It was such a success that Salsbury attempted to license the design to several European manufacturers including Piaggio. The Motor Glide set the standards for all later models. It inspired production of motor scooters by Powell, Moto-scoot, Cushman, Rock-Ola, and others. The Cushman Company produced motor scooters from 1936 to 1965.Cushman was an engine manufacturer that started making scooters after Salsbury found their offer to supply engines to be unacceptable. Cushman and Salsbury competed against each other, with both companies advertising the economy of their scooters. Cushman claimed an efficiency of 120 mpg-US (2.0 L/100 km; 140 mpg-imp) at 30 mph (48 km/h). Cushman introduced a centrifugal clutch to their scooters in 1940.[21] The Cushman Auto Glide Model 53 was designed to be dropped by parachute with Army Airborne troops, and was eventually called the “Cushman Airborne”. Cushman scooters were also used around military bases for messenger service.

Salsbury continued manufacturing scooters until 1948, while Cushman continued until 1965.

Small numbers of the 165 cc (10.1 cu in) Harley-Davidson Topper scooter were produced from 1960 to 1965 using the engine from their line of light motorcycles based on the DKW RT 125. It had a fiberglass body, a continuously variable transmission, and a pull-cord starting mechanism 191cc Sachs, 2-stroke single, 160kilo
Norway did not produced any scooters, but Tempo tried to introduce a scooter, called the Progress, which came from the German Progress-Werke, but it was a little too heavy and came too late to catch the scooter-wave. The project finally died in 1961, even though some were sold. The Progress had a 191cc Sachs engine with dynastart, 18″ wheels and a weight of 160 kilos.